Our article has just been accepted by Astronomy & Astrophysics: LINK.

The disk instability model (DIM) was introduced by Meyer & Meyer-Hofmeister (1981), Smak (1984), Cannizzo (1993), and Lasota (2001). It attributes the outbursts of dwarf novae to a thermal-viscous instability of their accretion disk, an instability to which nova-like stars are not subject. Figure 1. One way to show DIM on a plot is the orbital period (Porb) vs. mass transfer rate (Mdot) dependence, as this theoretical one from Osaki (1996). The dashed line is the border between the thermally stable and unstable disks. NL (nova-likes) and PS (permanent superhumpers) are located in the thermally stable region, as opposed to dwarf novae: SU (SU UMa stars) and their sub-classes, ER (ER UMa) and WZ (WZ Sge) stars, as well as UG (U Gem) and ZC (Z Cam) systems.

Our aim was to test the fundamental prediction of the DIM: the separation of cataclysmic variables (CVs) into nova-likes and dwarf novae (DN) depending on orbital period and mass transfer rate from the companion. In the past it has been done only twice, with a very sparse set of data (Smak, 1982, and Schreiber & Lasota, 2007). This time we test the DIM for a LARGE NUMBER of CVs. We analyzed the light curves from a sample of ≈130 CVs with a parallax distance in the Gaia DR2 catalog to derive their average mass transfer rate. We validated the method for converting optical magnitude to mass accretion rate against theoretical light curves of dwarf novae.

Our result is in a wonderful agreement with the DIM predictions! 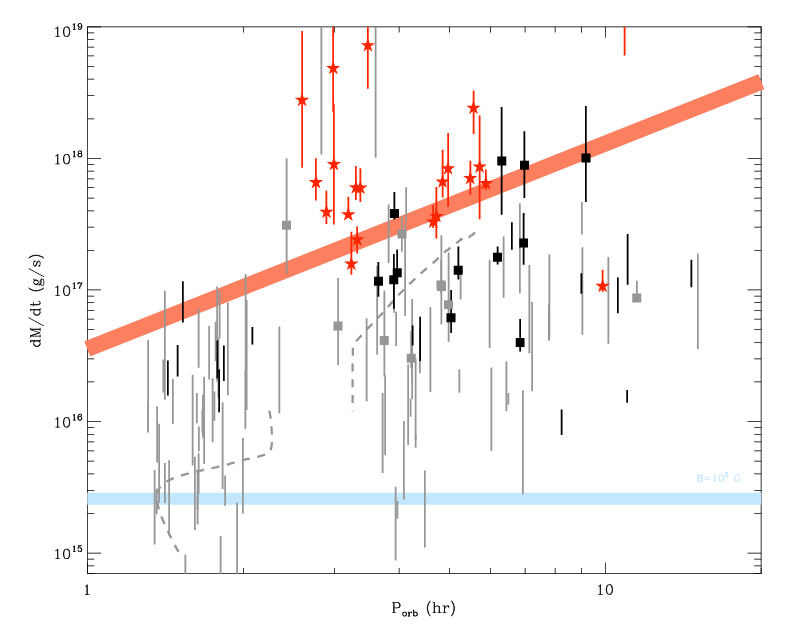 Dwarf novae (resp. nova-likes) are consistently placed in the unstable (resp. stable) region of the orbital period - mass transfer rate plane predicted by the DIM. None of the analyzed systems present a challenge to the model.
These results are robust against the possible sources of error and bias that we investigated.
The disk instability model remains the solid basis on which to construct an understanding of accretion processes in CVs.